Skip to content
» Portfolio Management » Nokia’s troubles arise from mismanagement not lack of innovation
Nokia has been in the news quite a bit lately.  Nokia’s new CEO Elop was recently quoted in the WSJ saying:

Rising competition in China and Europe has forced Nokia to cut its prices, contributing to the second-quarter sales miss, Mr. Elop said. He singled out Google’s Android operating system as a major source of Nokia’s current troubles in both regions 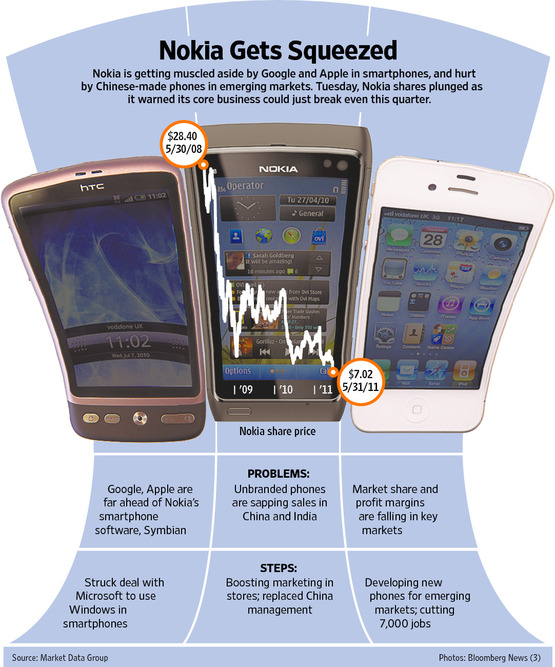 In fact, Elop announced on May 31 that company’s second quarter of 2011 will come in substantially below expectations. The outlook is so dismal that Nokia disavowed its forecasts for the rest of the year.  We have speculated in the past that Nokia’s management bureaucracy stifled innovation. The new article in Business week (Stephen Elop’s Nokia Adventure) has a lot more empirical evidence:

For a moment, Elop, 47, lays into the complacency he sees settling over the company. When he asks how many people in the crowd use an iPhone or Android device, few hands go up. ‘That upsets me—not because some of you are using iPhones, but because only a small number of people are using iPhones. I’d rather people have the intellectual curiosity to understand what we’re up against.’ Finally, after emphasizing that he believes mismanagement—not a lack of innovation—is what ails the company“

On his visit to Salo, Elop was shown a hi-fi speaker that encloses a phone, giving a richer sound. Another engineer handed him a phone and asked him to toss it into a tank of water. When the engineer dialed its number, the device, still submerged, rang. A nanoscale coating makes electronic parts water-resistant. “

However, few of the innovations came to market because of management:

This kind of stuff has been sitting around people’s desks, because it’s too hard to get anything done around here,” Elop says. “If we can get some of this to market—that’s what gives me confidence.

Recent history has hardened employees to the opportunities of a new era. “Under OPK, you could work on something for four years” before a decision was made to halt it, says Tuomas Artman, a former employee and Nokia contractor. OPK is Olli-Pekka Kallasvuo, the former CEO frequently accused by ex-Nokians of running a politicized, indecisive organization.

Even in well managed organizations, it may be necessary to halt ongoing R&D projects if the market realities or competitive pressures change.  However, the leadership should be able to communicate these changes to employees and need to be held accountable for their decisions.  This was definitely not the case at Nokia:

On Sept. 21, his first day, Elop sent an e-mail to every employee asking what they thought he should change, what should be left alone, and what they feared he wouldn’t understand. There were more than 2,000 responses, mostly about accountability. (One of Elop’s favorites: “At Nokia, everybody and nobody is accountable for nothing.”) Elop personally responded to each one, and word got around that the new boss was serious about addressing their concerns.

An interesting side node about Elop’s interesting change management style: He clearly has engaged the employee base, shown a sense of urgency and personal commitment.  Many of the traits we have been discussing about effective organizational change.  The real challenge for Elop is to instill accountability in the organization (more on it below).  Back to the R&D management, Elop quickly recognized that Symbian was a significant problem:

Most of these problems could be traced back to Symbian. Never beloved by users, it became hopelessly buggy as Nokia tried to make the 10-year-old dog pull off iPhone-like tricks.

Nor did Nokia have a coherent effort to develop a developer community for Symbian:

And while Apple and Google have created software tools that help outside developers to easily create apps, Nokia’s equivalent tools gave developers fits. “Developing for Symbian,” says Artman, the former Nokian, “could make you want to slice your wrists.”

The root cause of this seems to be a lack of a single driving vision (like that of Steve Jobs) to help prioritize what features to focus on:

Until last month, the company hadn’t delivered a single new smartphone on time or without major software glitches since 2009, in part because of delays as scores of different hardware teams lobbied to get their pet capability—a new camera, say—built into Symbian.

Another root cause is the lack of focus on  user experience.  The amazing factory and ability to crank out cutting edge hardware seemed to treat software as just one component.  This lack of integration allowed Apple and Google to gain market share:

And while Apple and Google focus on making one operating system to power a wide variety of devices, software at Nokia had been seen as just one more “component” to enable hardware teams to craft their latest models. “The terminology shows the mindset,” says Mark Wilcox, a former Nokia engineer. “The focus was on the phone, because Nokia had this amazing factory that could crank out 100 million units a year if you got a hit.”

The last root cause (at least for this post) seems to be a lack of R&D portfolio management processes.  As the link shows, the lack of results was despite large R&D investments.  In fact, Nokia invested almost 6.2B Euro in Symbian in 2010 – more than 10 times the total R&D budget at Apple.  The fact that the company had no visibility into the product pipeline or the R&D portfolio is even more shocking:

Elop drew out what he knew about the plans for MeeGo on a whiteboard, with a different color marker for the products being developed, their target date for introduction, and the current levels of bugs in each product. Soon the whiteboard was filled with color, and the news was not good: At its current pace, Nokia was on track to introduce only three MeeGo-driven models before 2014—far too slow to keep the company in the game.

So, instead of having a live dashboard to look at status of the entire R&D pipeline, the CEO had to collect information through interviews and phone call.  I wonder how accurate that information was!  As if that is not enough, the chief development officer was also unaware of the development status:

When they finally spoke late on Jan. 4, “It was truly an oh-s–t moment—and really, really painful to realize where we were,” says Oistämö. Months later, Oistämö still struggles to hold back tears. “MeeGo had been the collective hope of the company,” he says, “and we’d come to the conclusion that the emperor had no clothes. It’s not a nice thing.”

I wonder who is going to be held accountable for a complete lack of R&D portfolio management!  May be that can be the first order of business for the new CEO…  May be we can suggest our integrated system for R&D management? 😉 Back to R&D management: clearly, Nokia needed to remove unprofitable projects from their portfolio and that is what they decided to do (illustration via engadget):

Overall, this looks like a good R&D strategy from Elop: Eliminate low-return R&D and focus on core business of low cost phones:

Windows-based smartphones are the first stage of Elop’s three-part comeback plan. One huge incentive for dumping Symbian was to cut the company’s bloated costs. With an estimated $1.4 billion annual savings from discontinuing Symbian, he says he will invest more to protect and build Nokia’s massive low-end phone business in emerging and yet-to-emerge nations in Asia and Africa, which brought in 33 percent of Nokia’s sales in 2010.

The third priority seems to be investing in disruptive innovations by setting up skunkworks:

It’s a fully sanctioned skunkworks, with teams in Helsinki and Silicon Valley, staffed by top technical talent from the discontinued Symbian and MeeGo efforts, especially MeeGo. That initiative began when Nokia hired a crew of inventive open source evangelists in 2009 with orders to dream up entirely new devices. A few months later they were reassigned to develop a replacement for Symbian. The goal, as Elop told a group of engineers in Berlin on Feb. 29, is once again to “find that next big thing that blows away Apple, Android, and everything we’re doing with Microsoft right now and makes it irrelevant—all of it. So go for it, without having to worry about saving Nokia’s rear end in the next 12 months. I’ve taken off the handcuffs.

The key challenge here is going to be the same – effective R&D portfolio management processes.  Even if there are disruptive innovations in skunkworks, industry’s record of successfully integrating them in developed products is weak at best.  Hopefully, Elop’s superpower will help him through this challenge:

“It was classic Stephen,” says Myerson, who worked for Elop at Microsoft. “His superpower isn’t his great intuitive judgment. It’s his amazing ability to create a transparent, fast process that reasonable people can feel good about.”

Article first published as Nokia’s Troubles Arise From Mismanagement Not Lack of Innovation on Technorati.